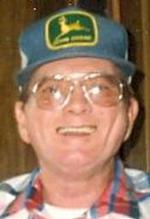 George V. Askew, 80, of Keithsburg, Illinois died Tuesday, January 17, 2012 at Mercer County Nursing Home, Aledo. Funeral services are 11:00 a.m. Saturday, January 21, 2012 at Keithsburg First Christian Church. Rev. Charles Reynolds, officiating. Burial, with graveside military rites, will be in Greenmound Cemetery, Keithsburg. Pallbearers are Darrell Askew, Arnold Askew, Brandon Askew, Jeff Peterson, Charlie Brown and Roy Pritchett. Honorary pallbearers are Greg Peterson and Ed McQuillen. Visitation is 5:00 - 7:00 p.m. Friday, January 20 at Keithsburg First Christian Church. Memorial may be left for the family. Dennison Funeral Home, Aledo is handling arrangements. George was born July 18, 1931 in Gower, Missouri a son of Irley "Bud" and Edith Lucille Shaw Askew. He graduated from Keithsburg High School in 1950. On November 30, 1957, he married Margaret Burnette in Keithsburg. She passed away February 14, 2005. George worked at Cannon Oiler and Oscar Mayer before buying the Standard Station in Keithsburg in the early 60's. He then worked at John Deere for 26 years, retiring on Oct. 31, 1993. After retirement, he went to work for Cannon Bronze, Keithsburg. He was in the Army from 1952-1960, serving in Germany during the Korean Conflict. Over the years, he had served on the Mercer County Board, Keithsburg Township Board and Keithsburg City Council. He served on the Keithsburg Fire Department for years, many of those as Chief. In his early years he enjoyed hunting and fishing. George was a busy man and always on the go. Several times throughout a day you could find him driving around town to see what was going on and stopping to visit with friends. He liked to tinker, anything he could do to work with his hands. He enjoyed fixing things for other people and was the neighborhood mower man. His greatest joy after retirement was being a part of his grandkids lives. George also had a special place in his heart for his dogs. Those left to cherish his memory are his sons and daughters-in-law, Darrell and Joyce Askew, Oquawka, IL and Arnold and Debi Askew, Keithsburg, IL; grandchildren, Terri, Brandon, Janessa and Becca; and sisters, Betty Pence and Gayle Pullen, both of Aledo. He was preceded in death by his parents, wife, infant daughter Terrie Lynn Askew, 3 brothers and 2 sisters.