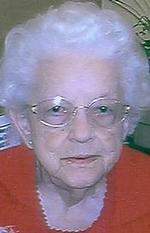 Genevieve I. Goben, age 91, of Viola, Ill., died Friday, February 18, 2011, at Mercer County Nursing Home, Aledo, Ill. Services will be held at 10 a.m. on Tuesday, February 22, 2011, at Dennison Funeral Home, Viola. Visitation will be held from 5 until 7 p.m. on Monday, February 21, 2011, Dennison Funeral Home, Viola. Burial will be in Viola Cemetery. Memorials may be made to the Viola Food Pantry. Genevieve was born November 6, 1919, in Viola, a daughter of Joseph and Elmyra (Gustafson) Angerer. She married Dale Goben on November 20, 1937, in Davenport. He preceded her in death on June 18, 1985. During the 1950s, she worked at the Winola High School Cafeteria. She was a sales clerk at Newberry Dime Store, Rock Island, during the 1960s, and later at McCabe's, Rock Island. Mrs. Goben enjoyed playing bingo and writing poetry. She was famous for sending cards for all occassions. She was a member of Viola United Presbyterian Church. She is survived by her sons (spouses), Danny (June) Goben, of Viola, and Roger (Karen) Goben, Blue Grass, Iowa; grandchildren (spouses), Jim (Carman) Goben, Julie (Eddie) Schulthies, Mike (Deborah) Goben, Diane (Andrew) Reichert, Deana Goben and Chad (Sarah) Goben; and 10 great-grandchildren. She was preceded in death by her parents, husband, brother, Dr. Elmore Angerer, and sister, Evangeline Palmer.

To order memorial trees or send flowers to the family in memory of Genevieve Goben, please visit our flower store.