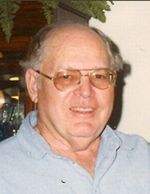 Frederick Joseph Murphy, loving husband, father, grandfather, great grandfather, businessman and world traveler died Tuesday, August 7, 2007 in Aledo, Illinois from complications of Parkinson's Disease. Fred is survived by his dedicated wife, Dona of New Boston, IL; children Tom, Robert, John and Susan all of the Twin Cities, Minnesota and extended family Mark and Dona Graves and family of New Boston, IL. He was preceded in death by his parents, brother, two sisters and his first wife, Alice. Frederick J. Murphy was born January 13, 1925 the son of Frederick and Katherine (Schwebel) Murphy. He served with the Army in Germany during World War II. Fred was a plastic industry businessman in the Twin Cities area and abroad. After leaving the Twin Cities he spent fun years in Tucson, AZ and traveling the U.S. in their RV before settling into a quiet life overlooking the Mississippi River in New Boston, IL. He enjoyed having a pilots license and volunteering for the Ramsey County (MN) Sheriff Air Patrol. Mr. Murphy's family wishes to thank the staff of Mercer County Nursing Home and Community Hospice for the care given to Fred. Dennison Funeral Home, Aledo, Illinois assisted the family with private services. A private burial will be held at Fort Snelling in Minnesota.

To order memorial trees or send flowers to the family in memory of Frederick Murphy, please visit our flower store.