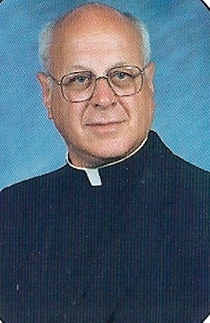 Richard was born July 4, 1933 in Boden, IL the son of John and Katherine Kovachevich Slavish. He graduated from High School and Junior College at St. Bede Academy in Peru, IL. He graduated from St. Mary of the Lake Seminary in Mundelien, IL in June of 1959 and was ordained Aug. 2, 1959. Father Richard’s first parish was Immaculate Heart of Mary in Galesburg. He also said mass at the state hospital for 6 ½ years. He then served at sacred Heart in Moline and at East Moline State Hospital. He went on to serve at St. Theresa in Alexis, Illinois and St. Aloysius, Watago and St. Peter  and St. Paul Nauvoo, and Sacred Heart, Dallas City. From there he went to serve at St. Francis of Assi, Kewanee and St. John Vianny, Cambridge. He has served as the Illinois Police Association State Chaplain for the last 20 years.His last parish was St. Anthony’s Catholic Church in Matherville, Illinois. Father Richard was a member of the Knights of Columbus in Monmouth, IL.

Richard was preceded in death by his parents.

Online condolences may be left at www.dennisonfuneralhome.com
To order memorial trees or send flowers to the family in memory of Father Richard Slavish, please visit our flower store.
Send a Sympathy Card
Send a Sympathy Gift