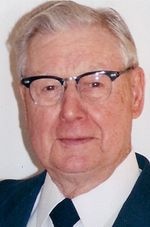 Ellsworth McClure, 98, formerly of Viola, Illinois died Friday, December 10, 2010 at Mercer County Nursing Home, Aledo. Services will be 11:00 a.m., Tuesday, December 14, at Dennison Funeral Home, Viola. Burial will be in Viola Cemetery. Visitation is Monday, December 13 from 4:00 - 6:30 p.m. followed by Masonic services. Memorials may be left to the Viola Fire Department, Viola United Presbyterian Church or Viola Blue Lodge #577. Online condolences may be left at www.dennisonfuneralhome.com. Ellsworth was born May 20, 1912 near Alexis, IL, the son of Harvey and Mae Brown McClure. He attended rural schools and graduated from Alexis High School. He married Myrtle Bloom on Nov. 22, 1941 in Kahoka, MO. She preceded him in death on Dec. 29, 2006. They farmed around the North Henderson and Rio area until 1945 when they then moved to a farm northeast of Viola. There they farmed until his retirement in 1978 when they moved into Viola. After his retirement he worked for 14 years at Crop Production Services, Viola. Ellsworth was a member of the Mercer County Farm Bureau, a board member of the Viola School Board of Education and a director for 20 years of the Viola Home Telephone Company. He belonged to the Viola Blue Lodge #577 where he served as Master. He received his 50 year pin in 1998. He was a member of the Viola United Presbyterian Church. Ellsworth and Myrtle enjoyed square dancing, camping and spending the winters in Texas. He loved and was adored by his family, grandchildren and great grandchildren. After his wife's death, Ellsworth resided at Heritage Woods of Aledo from 2006-2010. Survivors include his two daughter and sons-in-law, Janice and John Pollock and Sharon and Gary Esslinger, all of Viola; 5 grandchildren, 15 great grandchildren and 1 great great grandson. He was preceded in death by his wife, parents, two sisters - Ione and Eleanor and one brother - Marion.

To order memorial trees or send flowers to the family in memory of Ellsworth McClure, please visit our flower store.