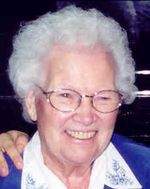 Ella M. Spengler, of Sherrard, went home to her Lord on Monday, May 29, 2006. She was a resident of the Mercer County Nursing Home, Aledo, at the time of her passing. Funeral services are 10:30 a.m. Friday, June 2, at Dennison Funeral Home, Viola. Burial will be in Viola Cemetery. Visitation will be 4-8 p.m. Thursday, June 1, at the funeral home. Memorials may be left to the family for a memorial to be established. The former Ella Lawson was born March 30, 1922, in Shale City, Ill., to George W. and Francis Dorothy Lawson of Viola. She married Al Castagnoli from Alpha in 1942. He was killed six months later in Italy in World War II. She later married Wayne Spengler of rural Sherrard on Sept. 26, 1950, farming alongside him for 50 years. He preceded her in death in December 2001. Professionally, Ella was a teacher at Seaton Grade School, secretary to the superintendent of Winola schools and secretary at Modern Woodmen of America. During World War II, she worked as a riveter on the B-25 assembly line at John Deere Company. When her mother passed away in 1943, she quit working outside the home and returned to her family home in Viola to raise her four younger siblings. Actively involved in her church and community, she was a member of the Preemption United Methodist Church as well as St. Matthew Lutheran Church, Milan. She was a Bible school teacher, a Sunday school teacher and a member of the women's club (WSCS). In the community she served as a PTA member and a Cub Scout den mother. Many also knew her as an Avon sales representative. She was a Republican precinct election judge in the Sherrard Precinct for over 40 years, a position she proudly held with high regard. Being with family, cooking and baking, farming and taking care of others are what Ella enjoyed most in her life. Ella's smile and warmth will be greatly missed by son and daughter-in-law, Rob and Cheryl Spengler, rural Sherrard; daughter and son-in-law, Tammy and Gary Olson, rural Preemption; three grandchildren, Addie Spengler, Shane and wife Cindy Spengler and Tyler McWhorter; four stepgrandchildren, Cari Olson, Kirk Olson, Ashley Doane and Alex Doane; three great-grandchildren, Hunter, Alexis and Ella Spengler; sisters, Ramona Lawson and Jackie Brown; brothers, Billy Lawson and Richard Lawson; many nieces and nephews; and lifelong friend, Georgia Zwicker. She was preceded in death by her husbands; parents; four sisters, Florine, Disie, Mary and Nancy; and a brother, Wendell Eugene. Rob would like to thank his sister for taking such good care of their mom.

To order memorial trees or send flowers to the family in memory of Ella Spengler, please visit our flower store.