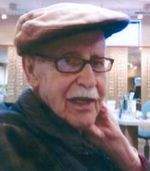 Duane Sandven departed this life on Saturday, April 24, 2010. He will be cremated, Dennison Funeral Home, Aledo, IL is in charge of arrangements. Interment will be at the Woolstock, Iowa Cemetery at a later date. Duane was born July 12, 1927 to Harold and Irma (Jones) Sandven in El Monte, CA. He grew up in Woolstock and Fort Dodge, Iowa. He met and subsequently married Joan E. Stevenson on June 6, 1949. He worked his younger years as a carpenter with his grandpa Jones and a few other jobs as an adult. He then moved to Muscatine where he retired from Grain Processing in 1987. He and Joan lived in Joy, IL until her death in 2004, he then lived with his daughter until his death. Duane had no hobbies per say but was very much involved with his religion. He is survived by his four children (spouses) Harold Sandven (Alice) of Muscatine, IA, Michael Sandven (Darlene) of Mesa, AZ, Penny Truitt (William) of Alexis, IL and Kathy Henderson (Ron) of Muscatine, IA; 10 grandchildren and 14 great grandchildren. Duane was preceded in death by his grandparents, parents, several aunts and uncles and his wife, Joan. Memorials can be made to the family in care of Dennison Funeral Home, PO Box 252, Aledo, IL 61231. Online condolences may be left at www.dennisonfuneralhome.com.

To order memorial trees or send flowers to the family in memory of Duane Sandven, please visit our flower store.