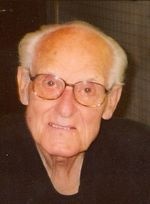 Duane H. "Mac" McFarland, 84, of New Boston, died Thursday, Oct. 9, 2008, at his home. There are no services. Cremation rites have been accorded. Dennison Funeral Home, Aledo, is handling arrangements. Memorials may be made to Bettendorf VFW Post 9128. He was born Sept. 26, 1924, in Odebolt, Iowa, the son of Glen E. and Elizabeth M. Stueckrath McFarland. He worked at Case IH as a fork truck driver in the warehouse. In 1987, after 20-plus years, he retired, and in 1991, moved to New Boston. From 1941 to 1945 he served in the Navy during World War II. He was a member of the Bettendorf VFW Post 9128. Survivors include his four daughters, Marjorie Mick, Iowa, Beth Faler, Missouri, Laurie Roth, Florida, and Mary Mullins, Davenport; three sons, Kevin McFarland, Odebolt, Roy McFarland, Sioux City, Iowa, and Jamey McFarland, North Carolina (currently serving with the Navy in the war); 10 grandchildren; four stepgrandchildren; and five stepgreat-grandchildren; sister, Florence Bye, Odebolt; brother, Harold McFarland, Albert City, Iowa; and special friend, Lee Asleson, Princeton, Iowa. He was preceded in death by his parents; and a son, Michael.