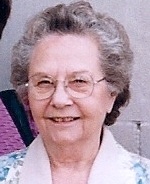 Visitation is at Dennison Funeral Home, Viola on Tuesday, October 20th beginning at 10:30 a.m. until the time of service at 11:30 a.m.  Burial will be in Viola Cemetery.  Memorials may be left for Viola United Presbyterian Church or Alzheimer’s Association.

The former Dorothy Swanson was born September 13, 1920 in rural Alexis, a daughter of Alden and Gertrude Decker Swanson.  She married Mac Yerkey, March 14, 1942 in Kahoka, Missouri.  They were married for over 65 years, until his death on October 22, 2007.  Dorothy was a member of the Viola United Presbyterian Church and the American Legion Women’s Auxiliary.  She also was active in community activities and school events.  Most importantly, she was a loving wife, mother and grandmother.

She was preceded in death by her parents, husband, and sister:  Doris Lingafelter.

Online condolences may be left at www.dennisonfuneralhome.com.
To order memorial trees or send flowers to the family in memory of Dorothy Yerkey, please visit our flower store.