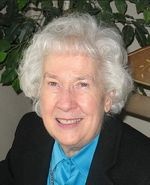 Dorothy J. Patton, 82, of Manchester, Iowa formerly of Aledo, Illinois, died Thursday morning, January 10, 2008 at the Regional Medical Center in Manchester following a sudden illness. Funeral services will be 1:00 p.m., Sunday, January 13, 2008 at the New Boston United Methodist Church with visitation from 12:00 p.m. until the time of service. Services will be conducted by President Charlie Marston of The Church of Jesus Christ of Latter-Day Saints. Burial will be in New Boston Cemetery. Memorials may be left for the New Boston Cemetery or American Heart Association. Dennison Funeral Home, Aledo is handling arrangements. Dorothy was born December 24, 1925 in New Boston, Illinois, the daughter of Ward N. and Rose M. (Gettemy) Stevens. She graduated from New Boston High School in 1944 and attended MIC Business School in Moline, Illinois. On January 17, 1948, Dorothy was united in marriage to Murray B. Patton in Aledo, Illinois. She worked as a homemaker and bank officer at National Bank of Aledo for over 32 years, retiring from the bank in 1990. Dorothy was an active worker in the New Boston Methodist Church for many years and served faithfully in the Church of Jesus Christ of Latter-Day Saints for the past 28 years. She enjoyed gardening, canning, bowling, family history, following professional sports, watching movies, cooking, card playing, Sudoku, working crossword puzzles and was an Elvis lover. Survivors include three children, Teresa (Terry) Griffith of Manchester, IA, Tom (Gay) Patton of Orion, IL and Tricia (Scott) Morrow of Boston, MA; ten grandchildren; seven great-grandchildren; a sister, Sally (Don) Davis of Pardeeville, WI; and many beloved nieces and nephews. Dorothy was preceded in death by her parents, Ward & Rose Stevens; her husband, Murray Patton in 2006; and a sister, Marguerite Histed.

To order memorial trees or send flowers to the family in memory of Dorothy Patton, please visit our flower store.