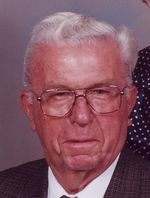 Donovan O. Hutchins of San Manuel, Ariz., died Thursday, Dec. 6, 2007, in Tucson, Ariz. Services will be 1 p.m. Thursday, Dec. 13, at Dennison Funeral Home, Viola. Burial will be in Viola Cemetery, with graveside military rites by Mercer County V.F.W. Post 1571. Visitation will be 6-8 p.m. Wednesday, Dec. 12, at the funeral home. In lieu of flowers, donations may be made to Odyssey Health Care, 1730 E. River Road, Ste. 107, Tucson, AZ 85718 or San Manuel Presbyterian Church 801 McNab Pkwy, PO Box 679 San Manuel, AZ 85631. Online condolences may be left at www.dennisonfuneralhome.com. Mr. Hutchins was born Oct. 13, 1923, in Joy, a son of Raymond and Nona Wakeland Hutchins. He married Maxine Thompson in 1942 in Kahoka, Mo. Mrs. Hutchins passed away April 14, 2007. Mr. Hutchins was a retired postmaster, had been a farmer, raising purebred Spotted Poland China hogs, owner of Hutchins TV and Appliances and worked for John Deere after serving for two years in the United States Navy during World War II. He was a member of the San Manuel Presbyterian Church, where he had served as deacon. He was also a member of the V.F.W., Elks and the American Legion. Donovan had been a 4-H leader, Viola Little League coach and was proud of being on the Aledo football team that was Little 6 champions three years in a row. Survivors include a daughter, Janice (Mrs. Terry Nelson), Weatherford, Texas; son, Raymond, Green Valley, Ariz.; and son, Rodney and wife Debbie, Tucson; six grandchildren; four step-grandchildren; two great-grandchildren and two siblings, Darrell Hutchins and Marjorie Goding, both of Aledo, Illinois. He was preceded in death by his wife and parents.

To order memorial trees or send flowers to the family in memory of Donovan Hutchins, please visit our flower store.