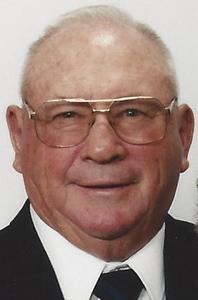 He served 2 years in the Army during the Korean Conflict, one of those years in Germany.  Upon his return, he worked for Anderson Lumber Co. in Keithsburg and Aledo Street Dept.  He also worked for the Corps of Engineers of Rock Island at Lock and Dam 18 for 7 years, before he began farming for himself.  He was a pioneer of his time…the first to irrigate in 1964, had the first center pivot valley irrigation system and raised vegetable crops.  In 1968 he was named to the Dekalb 200 Bushel Club and in 1969 he received the Top Farmers of American Association Award.

Don was an avid hunter and enjoyed all wildlife.  He started the Wild Cat Hunting Reserve.  He enjoyed all sporting events.  In his spare time, he enjoyed plowing snow, smoking turkeys and making jerky.  His greatest joy was spending time with his family and doing for others.

He was preceded in death by his parents, grandson Nathaniel Rhoades and brother Otis Hawn, Jr.

To order memorial trees or send flowers to the family in memory of Donald Hawn, please visit our flower store.