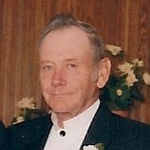 There are no services, a private burial will be held at a later date in Farlow Grove Cemetery, Matherville.  Memorials may be left in his name for the family or Mercer County Animal Shelter.  Dennison Funeral Home, Viola assisted the family.

Denny was born February 6, 1941 in Rock Island, the son of Clifford and Dora Clauson Anderson.  He graduated from Aledo High School.  On April 15, 1961, he married Dorothy Redpath at St. Anthony’s Catholic Church, Matherville.  Denny was a lifelong carpenter whose craftsmanship was well known in the area.  He enjoyed woodworking, gardening, mushrooming, bird watching and NASCAR.

Survivors include his wife, Dorothy of Viola; daughters, Veronica (Scott) Verschoore of Reynolds, Juli Anderson of Aledo, Suzanne Sandusky (Dan Sloan) of Matherville and Gina (Brent) Cone of Coal Valley; 10 grandchildren; 8 great grandchildren and a “special” Yorkie friend, Andy.  He was preceded in death by his parents.

To order memorial trees or send flowers to the family in memory of Denny Anderson, please visit our flower store.