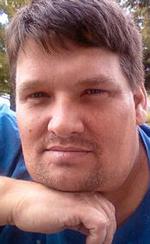 G. Dean Nelson, Jr., 41, went to Heaven to be with his grandpa, Sonny Brown, on Sunday, March 27, 2011. He died at his home in Keithsburg that he shared with his girlfriend, Melissa Davis. Dean lived in either Keithsburg or New Boston all of his life. Funeral services for G. Dean Nelson will be at 1 p.m. on Friday, April 1 at the New Boston United Methodist Church. Rev. Beth Nelson will officiate. Burial will be in the New Boston Cemetery. Visitation time is 4 - 7 p.m on Thursday, March 31, 2011 at New Boston United Methodist Church. Dennison Funeral Home, Aledo, is handling arrangements. In lieu of flowers, memorials may be left for the family. Online condolences may be left at www.dennisonfuneralhome.com. Dean was born on April 14, 1969 in Aledo. The son of Gerald and Roxann (Brown) Nelson. He graduated from Westmer High School in 1987. Dean had worked for Murphy Brothers. He was an avid sports fan and loved to fish. Dean loved life, never met a stranger and dearly loved his children. He will be sadly missed by everyone whose life he touched. He is survived by two daughters, Allissa Nelson of Seaton and Kimi Nelson of Joy; a son, Gerad Nelson of Joy; his parents, Gerald Nelson and Roxann Nelson both of Keithsburg; brothers, Mick (Kim) Nelson, Milan and Todd (Nora) Nelson, Aledo; nieces, Kendra and Briana, and nephews Zachary and Chase; his grandmother Lou Brown of Muscatine, Iowa and his girlfriend Melissa Davis of Keithsburg; and several aunts, uncles and cousins. He was preceded in death by two grandfathers, a grandmother, several aunts, uncles and cousins.