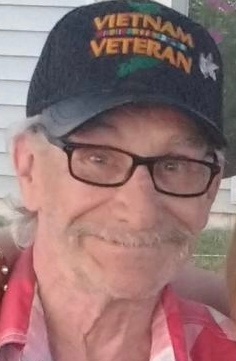 Funeral services are Monday, January 21st at 4:30 p.m. at First Christian Church, Keithsburg with visitation preceding from 2:30 p.m. until the time of service.  Military rites will be conducted by Aledo American Legion Fallerans 121.  Serving as pallbearers are Chris Defrieze, Tim Shoemaker, Rick Shoemaker, Donnie Carle, Rusty Speck and Tom Moore.  Following the service, cremation will be accorded.  Private graveside services will be held at Rock Island National Cemetery at a later date.  Memorials may be left for the family.  Dennison Funeral Home, Aledo is handling arrangements.

David Alvin was born October 10, 1947 in Dubuque, Iowa the son of Alvin George and Mathilda Schroeder Goepfert.  He enlisted in the United States Marine Corp, serving in Vietnam from 1968-1970.  Dave married Jeri Lynn Shoemaker, then later married Cathy Eddleman.  Fonz worked at Case in Bettendorf and Burlington, retiring in 1999 after 33 years.  After retirement, he worked for Slagel Farms delivering produce.  He was a member of the American Legion in Mississippi and the Bettendorf V.F.W.  Fonz enjoyed cars, boating, playing putt-putt golf and most of all, socializing.  His greatest love was having family dinners and time spent with his grandkids.

He was preceded in death by his parents, wife:  Cathy and sister:  Darla Kay Goepfert.