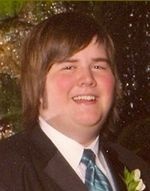 David W. Miller, 17, of Joy, Illinois died Friday, January 18, 2008 at St. Francis Medical Center, Peoria from injuries sustained in an automobile accident. Visitation will be Sunday, January 20, 2008 from 3:00 - 7:00 p.m. at the Fellowship Hall of St. Catherine's Catholic Church, Aledo. At 7:00 p.m. David's friends are invited to share memories and thoughts of David, Rosary will be prayed following. Mass of Christian Burial will be Monday, January 21 at 11:00 a.m. at St. Catherine Catholic Church, Aledo. Burial will be in Peniel Cemetery, Joy. In lieu of flowers, memorials may be left for St. Catherine Catholic Church or Aledo/Westmer Musical. Dennison Funeral Home, Aledo is handling arrangements. David Wayne was born July 20, 1990 in Aledo, Illinois, the son of Joseph and Catherine (Vipond) Miller. He was currently a Senior at Westmer High School, Joy, where he was a member of Scholastic Bowl. David loved being in school plays, he wanted to pursue a career in theater. David was always on the go. He worked at McDonald's and Vitale's in Aledo. Spending time with friends and family was important to him. Going golfing, bowling, reading and playing video games were a few of his hobbies. He was also active in St. Catherine's Church, where he was a member. Through the church, David went on two mission trips to South Dakota and belonged to the Dead Theologians Society. Survivors include his parents, Joe and Cathy Miller, Joy, IL; brothers and sisters-in-law, Tony and Ann Miller, Dixon, IL and Joel and Jen Miller, New Boston, IL; sister, Mandy Miller, Aledo, IL; nieces, Alexis, Zoey and Tessa and his grandmother, Jean Miller, Joy, IL. He was preceded in death by his grandparents, Wilbur Miller and Malon and Beverly Vipond and a niece, Korey Ann. David had expressed many times over the years that he wanted to be an organ donor if something happened. The family is comforted in knowing that many lives will be saved by David's generosity.

To order memorial trees or send flowers to the family in memory of David Miller, please visit our flower store.