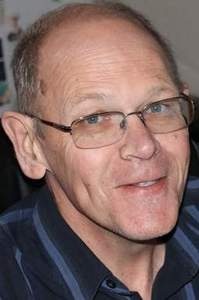 Funeral services are 10:30 a.m. Wednesday, Sept. 11th at Viola United Presbyterian Church.  Burial will be in Farlow Grove Cemetery, Matherville.  Visitation is 4:00 – 8:00 p.m. on Tuesday, Sept. 10th at the church.  Memorial may be left for the church or family.
Dennison Funeral Home, Viola is handling arrangements.

Dave was born Sept. 3, 1954 in Moline to Ralph and Betty Wigant Carlson.  He graduated from Winola High School and attended Black Hawk College.  He married Holly Roesner on November 9, 1985 in Rock Island.

He was employed by ABC Supply Co. for 28 years, where he was a branch manager.  Dave was blessed to have a job he loved, and enjoyed being a part of the “ABC Family”.

Dave was a member of the Viola United Presbyterian Church, where he was a former elder.  He was a fan of the Fighting Illini and Chicago White Sox and loved to fish, especially with his son, JC.

Dave was preceded in death by his father Ralph, brother Larry and special brother-in-law Dave Bruning.