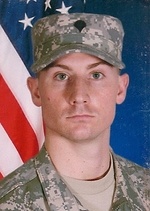 Cpl. Luxmore will arrive in the area on Saturday around 11:40 am.  We estimate we will be departing the airport around 12:40 pm to be enroute to Aledo. The route of travel will be...we will proceed in a caravan from the Quad Cities on Rt. 150 through Orion, IL until we reach Illinois Rt. 17.  We will take Rt. 17 through New Windsor, Viola onto Aledo.  We will gather in Aledo Central Park for a small service..."A Hero's Welcome".

Corporal Bryant J. “B.J.” Luxmore, 25, of New Windsor, Illinois, son of Brenda and Leonard Luxmore, husband of Jaimie Luxmore and father of Lane, was killed in Afghanistan on June 10, 2012.

Corporal Luxmore will be buried with full military honors.  Funeral services are 10:30 a.m. Tuesday, June 19, 2012 at Sherrard High School.   Following the service, as the family holds a private burial in Hopewell Cemetery, friends are invited to proceed to New Windsor United Presbyterian Church for a luncheon.  Visitation is from 3:00 p.m. to 8:00 p.m. Monday, June 18, 2012 at Sherrard High School.  In lieu of flowers, the family request memorials be made to the Bryant J. Luxmore Memorial Fund to be used toward various organizations of significance to the family, as well as Lane’s education.  Dennison Funeral Home, Viola is handling arrangements.

Bryant was born on November 3, 1986 in New Windsor, Illinois, and was an avid athlete and student.  He graduated from Sherrard High School in 2005, where he was a member of the football and baseball teams.  Bryant then attended Monmouth College and graduated from Illinois College in 2009, where he continued his baseball career at the collegiate level.

Bryant entered the U.S. Army in April 2011 and was assigned to the 1 st Battalion, 64 th Armor Regiment, 2 nd Brigade Combat Team, 3 rd Infantry Division.  He married Jaimie Lower on October 8, 2011 and the couple relocated to Fort Stewart, GA to begin their life together with their son, Lane.  Bryant was deployed to Afghanistan just two months ago.  He was posthumously promoted to Corporal, awarded the Bronze Star, Purple Heart and Combat Infantryman Badge.

Bryant was preceded in death by his paternal grandfather, Bill Luxmore.

To order memorial trees or send flowers to the family in memory of Cpl. Bryant "BJ" Luxmore, please visit our flower store.