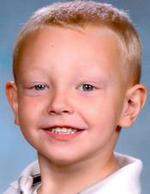 Cole Dieckman, age 5, of Joy, Illinois passed away at his home on Monday, January 16, 2012 surrounded by his loving family. His courageous 16 month battle with cancer, finally over. A celebration of his life will be 11:00 a.m. Saturday, January 21, 2012 at First Baptist Church, Aledo, Illinois. Burial will be in Wagner Cemetery, rural Grandview, Iowa (Louisa County). Those wishing not to travel to the cemetery are welcome to later come to the Mercer County V.F.W. to join the family in a time of food and fellowship. Visitation is Friday, January 20, 2012 from 3:00 - 8:00 p.m. at Aledo First Baptist Church. The family request, that in lieu of flowers, memorials may be left to University of Iowa Child Life Dept. or Dance Marathon. Dennison Funeral Home, Aledo is handling arrangements. Cole Henry-Neal Dieckman was born January 9, 2007 in Omaha, Nebraska to Caleb Henry and Dawn Carroll (Morrison) Dieckman. He was excited when he was a big enough boy to attend New Boston Elementary Pre-School. He liked to do arts and crafts, play in the sandbox and especially play with his brother and cousins. Cole loved farming with Grandpa and had a love of John Deere and semis. He was best buddies with his puppies, Sadie and Cooper. Cole was a strong willed little boy and had a smile that lit up a room. He will be deeply missed by his family. Those left to cherish his memory are his parents, Caleb and Dawn Dieckman and his big brother, Caden Jeffery Miller, all of Joy, IL; grandparents, Randy and Chris Morrison, Joy, IL and Bob and Vicki Hedden, Wilton, IA and his great grandmother, Norma Morrison, Joy, IL. He was preceded in death by his grandpa, Randy "Tucker" Dieckman. Online condolences may be left at www.dennisonfuneralhome.com.

To order memorial trees or send flowers to the family in memory of Cole Dieckman, please visit our flower store.