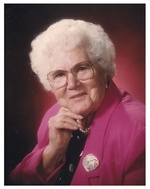 Funeral services are Friday, June 15, 2012 at 2:00 p.m., with visitation from 1:00 p.m. until the time of service, at Keithsburg First Christian Church.  Rev. Charles Reynolds officiating.  Burial will be in Greenmound Cemetery, Keithsburg.  Memorials may be made to the Strom Center Warren County, Monmouth or the Keithsburg Volunteer Fire Department.  Dennison Funeral Home, Aledo is handling arrangements.

Charlotte was born April 13, 1914 in Sheldon’s Grove, Illinois.  She was the third youngest of 11 children born to William and Cora Thornton Winston.  She attended Seaton High School until the family moved to Keithsburg, Illinois.  She was baptized there at the Methodist Church.

In June of 1932, she married John W. Willman of Keithsburg.  Charlotte was a homemaker and spent many years helping her husband on their farms, until his retirement in 1979.  From 1979 to 1983, she and John spent the winter months at Cedar Creek Lake in Texas.  He died in April of 1983, at the age of 70, in a car accident.

After John’s death, Charlotte moved to Kirkwood, Illinois to be near her sisters, Nellie Dutton and Elva Kersey.  She also transferred her church membership to the United Methodist Church in Kirkwood.  In about 1990, she moved to Monmouth, Illinois where she resided until July 2010.  At that time, she moved to Garland, Texas to be closer to her daughter Shirley Runion.

Charlotte showed great love for her family and friends throughout her life.  Some of her favorite activities were traveling, playing cards, sharing stories, and pulling silly pranks with her sisters. She was renowned in the family for her beef and noodles.  She always took time to call on friends and family who needed a caring listener.  She also enjoyed visiting her four children and their families who had moved to other states.  Everyone looked forward to her laughter-filled visits and hated to see her leave.  Charlotte was truly there for you whenever you needed a hug or a kind word.

She was preceded in death by her husband John, oldest daughter Priscilla Parker, 5 sisters and 4 brothers.

To order memorial trees or send flowers to the family in memory of Charlotte Willman, please visit our flower store.