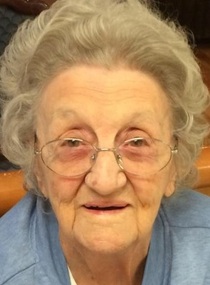 Billee was born January 2, 1924 in Matherville, Illinois a daughter of George T. and Alice Maynard Adams.  She married Robert E. Basala on October 6, 1945 in Matherville, Illinois.  They were married until his death on October 14, 2009.  During World War II, Billee worked at the tank arsenal.  She had been a cafeteria worker for the Sherrard School district and worked several years at Morrison’s Market in Viola, prior to retirement.  She was a member of St. Anthony’s Catholic Church.  She had a great love for her family, especially her grandchildren.

She was preceded in death by her parents, husband, 4 brothers and 1 sister.