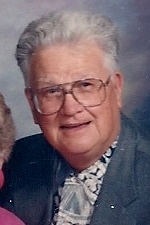 Bill Lawson, 89, of Rock Island, Illinois died Thursday, April 10, 2014 at Trinity Rock Island.  Visitation is Monday, April 14 th from 1:00 – 2:00 p.m. at Dennison Funeral Home, Viola with funeral services to follow at 2:30 p.m.  Burial will be in Viola Cemetery.  In lieu of flowers, memorials may be left for a memorial fund to be established.

Bill was born in Shale City, Illinois on July 24, 1924 a son of George William and Frances Dorothy Lawson.  He graduated from Viola High School in 1942.  On April 21, 1950, he married Elaine Richardson in Rock Island.  During the 1940’s, he ran the Jack Sprat Store in Viola.  He was a salesman for many years, retiring from D&B Distributors, Galesburg.  Bill loved to golf…he had been a member of Mill Creek Golf Club and after retirement, he worked at Highland Springs Golf Course.  He also enjoyed bowling, he even rolled a perfect 300 game.  He was a member of Viola Masonic Lodge.  You could usually find Bill having his morning coffee at Milan Hy-Vee.