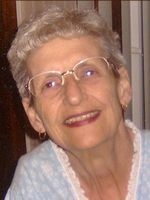 On Tuesday, November 25, Bev Robinson of Aledo, Illinois (formerly of Viola), completed her courageous battle against lung cancer. She was welcomed into the House of the Lord at 8:30 in the morning after a brief admission at the Aledo Rehabilitation and Health Care Center, Aledo. Funeral services are 2:00 p.m. Saturday, November 29 at Dennison Funeral Home, Viola. Burial will be in Viola Cemetery. Visitation is Friday, November 28 from 4:00 - 7:00 p.m. at Dennison Funeral Home, Viola. Memorials may be left for the American Cancer Society. Online condolences may be left at www.dennisonfuneralhome.com. Beverly Jean Esslinger was born in Galesburg, IL on November 7, 1929. She was the eldest of four children of the late Charles and Lois (Potter) Esslinger of Viola. On November 12, 1949, Beverly was wed to the late Vernon Thomas Robinson. The couple was married for 56 years and resided nearly the entire time at their family home in Viola. Bev and Vern had two children and one grandchild. Vern Robinson passed away on September 30, 2005. She is survived by her son, Mike Robinson, 45, of Central City, Iowa, her daughter, Jan Marie (Robinson) Nelson, 43, and her granddaughter, Karen Lee Nelson, 18, of Milan. Bev is also survived by all of her siblings and their spouses: Larry and Beverly (Schutte) Esslinger of Liberty, MO, Gary and Sharon (McClure) Esslinger of Viola and Karen (Esslinger) and Kenny King of rural Aledo. Additional survivors include her sisters-in-law, Louise (Mrs. Robert) Robinson of Matherville, Ila (Mrs. Darrell) Robinson and Hazel (Robinson) Anderson of Viola. She is also survived by twenty-two nieces and nephews. Mrs. Robinson was preceded in death by her parents and her husband. Also preceding her in death were her sister-in-law, Ethel (Robinson) Bloomfield and her brothers-in-law, Merle, Robert, Darrell and Marion Robinson, all originally from Viola. In her youth, Bev attended Viola Community (later called Winola) High School, and she had numerous jobs including babysitting, being a waitress and working at ServUs Rubber and Form Fit. However, it was within the health care field that she discovered her true niche in life, and she enjoyed being a certified nursing assistant for twenty-five years. She was employed at both the Mercer County Nursing Home and Hospital during her career. Bev Robinson had many friends and socially she enjoyed playing Bingo with her sister Karen and participating in card tournaments. She was deeply loved by all of her family and friends.

To order memorial trees or send flowers to the family in memory of Beverly Robinson, please visit our flower store.