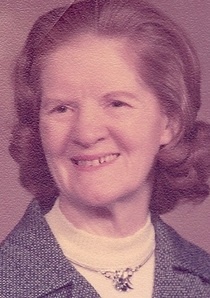 Services are 3:00 p.m. on Thursday, January 14th at Dennison Funeral Home, Viola, with visitation one hour prior.  Burial will be in Preemption Cemetery.  Memorials may be left for First Evangelical Free Church of Moline or the Salvation Army.

Alma was born February 23, 1912 in Mount Vernon, Illinois, a daughter of Don and Grace Pigg Allen.  In 1933, she married Richard E. Whitsitt in Morrison, Illinois.  In her younger days, she played for the Rex Independents, a traveling basketball league in Davenport.  After her husband passed away in 1953, Alma and her brother spent nearly a year traveling Vienna and Europe.  She was a farm wife and also worked at the Rock Island Arsenal for 17 years, retiring in 1979.   She enjoyed yard work, sewing and piecing quilts.  Mrs. Whitsitt was a member of First Evangelical Free Church, Moline.  She volunteered at the church’s library since its opening, retiring when she turned age 90.

She was preceded in death by her parents, husband, 5 sisters and 5 brothers.

To order memorial trees or send flowers to the family in memory of Alma Whitsitt, please visit our flower store.