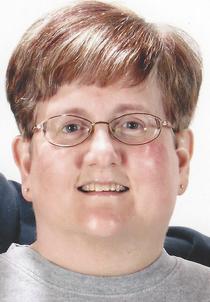 Abbie Whitington, 58, of Aledo, Illinois passed away peacefully in her home on Sunday, March 19, 2017.  Abbie was born June 20, 1958 in Aledo, Illinois the daughter of Raymond “Abe” and Dorothy Weeks Leng.  She was born and raised an Aledo Green Dragon through and through, graduating from Aledo High School in 1976.  Abbie worked for the phone company for several years.  Her friends at work remember her cracking jokes in the office and letting the service men sneak out a little early on occasion.

Abbie was a fan of rock and roll and country music, attending ALL of the concerts and having a great time with friends and family.  She was a hoot!  Example, sneaking past security guards to get up close at a Kenny Rogers show.  She also loved her horse family, from trail rides and parades to camp fires and having way too much fun.  Other hobbies included; family vacations and watching ceramics wash away down the drain.

She met Jerry Whitington of Viola and they were married June 15, 1985.   Abbie then worked in the office at Mercer County Nursing Home.  Abbie began having health problems in the early 90’s.  She was diagnosed with Multiple Sclerosis in 1993.  She fought the disease for 25 years with highs and lows, and ups and downs.  She never let it break her spirit.  She did her best to keep everything and everyone going over the years.  Even if you can’t walk, or even move, you can still enjoy life.  She will be missed by many!

She was preceded in death by her parents and her husband, Jerry on October 2, 2013 and their beloved dog, Nikko.

A Celebration of Life will be held on Friday, March 24th from 4:00 – 7:00 p.m. at United Presbyterian Church in Viola, Illinois.  In lieu of flowers, the family asks that memorials be left in her name with the National Multiple Sclerosis Society – Greater Illinois Chapter, 525 W. Monroe Street, Chicago, IL  60661.  Abbie’s sons invite friends and family to write down a memory or story about Abbie and bring it to the celebration of her life, or leave an online condolence at www.dennisonfuneralhome.com.